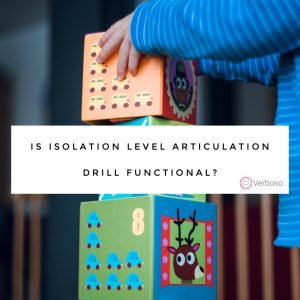 One of the key goals of speech therapy services is to help improve kids’ ability to function in activities of daily living. For speaking, this means being able to communicate wants, needs, and ideas clearly enough for listeners to make sense of the message. To help achieve this goal for severely unintelligible kids, particularly young toddlers and preschool aged children, we often focus on building a core vocabulary that can be understood. Because the sounds contained in these words can be variable, a traditional articulation hierarchy may not be used—in fact, some SLPs argue that isolation level practice is actually NOT functional for kids.

However, we know from motor learning principles of speech that establishing a production in isolation or syllable level is an important building block to being able to then produce that sound in words, and later phrase, sentences, and conversation. In fact, skipping the step of isolation practice to first teach the correct placement for the sound and then drill to attain enough automaticity of motor memory to be able to be successful when attempting the next level of difficulty in the hierarchy is critical to success of speech production improvement. So, how do we take this very specific task and make it functional?

First, we need to remember the basics of goal writing and how that helps to inform, or lay out the road map, for our treatment plan. A common long term goal, which is the big picture, “where do I want this kid to get to” goal, could be something like “Child will improve speech intelligibility in order to communicate wants, ideas, and needs clearly for activities of daily living.” This is our ultimate aim when providing speech therapy services for kids with articulation or phonological impairment.

Short-term objectives are the measurable, objective, day to day types of goals that we write to help move kids systematically towards their long term goal. For isolation drill, this could be something like “child will produce /b/ with 80% accuracy in isolation when given visual and verbal cues in order to improve speech intelligibility” or “child will produce /s/ in isolation in 8 out of 10 trials in order to improve speech intelligibility, when provided with sound shaping cues from /t/.” These objectives contain a target (the sound), a criterion for determining whether they met the objective (an accuracy of proportion of trials correct), a level of the hierarchy (in this case, isolation), a level of support (how will you, the therapist help them reach that goal), and finally, a nod to why (because we know that accomplishing this objective will help improve their intelligibility based on our knowledge of motor learning principles).

This template for short term objective writing for articulation can be modified for any type of speech production activity. By tracking performance towards the objective, we know when to then move up the hierarchy towards the next level, perhaps isolation level practice with no model or cues, then syllable with segmentation support, then syllables with an immediate model, followed by no model, etc.

Know when to move on from isolation drill

Using data tracking of performance on a short term objective leads to the next point—when to advance up the hierarchy. One of the limitations of isolation practice with respect to functionality is that yes, it is true that we don’t speak in isolated phonemes. However, isolation practice is meant to be a stepping stone along the path to improved speech intelligibility for activities of daily living. We do not want to spend unnecessary amounts of time at this level.

So, how long is too long? As a general rule of thumb, once a child is able to produce the short term objective at the criterion written in the goal (80% across two sessions is a conventional standard for readiness to advance), we can move on to the next level. This is why I don’t like writing objectives, personally, at levels of accuracy below 80%. I track in my data if performance was at 20%, 50%, etc, and report that as progress in a 10 session progress report, but my main purpose of using short term objectives is again as the road map for the therapy program. To that end, while progress from 20% to 70% is substantial and important for some kids, it’s not enough to hit the criterion for considering advancement—so, I keep the objective fixed at that higher expectation.

It’s important to note, though, that isolation level practice should not take more than two to three sessions at the introduction of a new target, maximum. In fact, as soon as a child starts demonstrating some consistency in ability to produce the sound accurately, say 10 repetitions in a row, I’ll start probing for ability to produce the sound in segmented syllables, then blended syllables. In this way, you could go into a first session, teach a sound such as /s/ in isolation, track data for 10 to 20 productions, see the child is 100% accurate, and decide to move up to syllable level. Then you can report both objectives on your treatment note, isolation and syllable, and report the accuracies for each. Next session, you would start back up with syllable level, and only drop down to isolation if you think a refresher is needed. The aim is to get to words sooner rather than later, but only as soon as the child is ready—which is at around 80% accuracy at syllable level.

But what if the accuracy level for isolation production is never as high as 80%?

This is a complicated problem for a number of reasons. First, there’s the issue of perception of whether the production is correct. What parameters are you listening for/holding the child accountable against? Are you accepting approximations? We need to be careful that we’re reinforcing and counting as correct only those productions that we think will lead to the maximum intelligibility for the child, and this could vary based on child specific variables.

For example, children with structural velopharyngeal insufficiency characterized by hypernasality and audible nasal emission can present with compensatory articulation errors such as glottal stops for oral stops or pharyngeal fricatives for /s/ and /z/, which are errors in placement that are mislearned. We can target improved placement of articulation, and tolerate nasal emission that we know will not be corrected until surgical intervention takes place. This is different than an example of a back velar nasal fricative substituted for /s/, where we have mislearning of both placement and direction of airflow release, and so we need both parameters to be correctly realized in a production in order to reinforce.

What about a child with severe dysarthria and apraxia due to neurological issues? We may opt to reinforce approximations of productions that are close enough to the intended target that they can be differentiated from other phonemes, and identified by listeners as the target, in order to improve functional communication. Again, we often need to start with isolation practice in order to be able to reach this level of accuracy because of the severity of difficulty with oral motor control. But, we may be reinforcing approximations and counting these as correct in order to reach our criterion of 80% before advancing to more linguistically complicated stimuli.

For the vast majority of children, failure to reach 80% accuracy in isolation is likely a mismatch in teaching and learning methods. We need to experiment with different cues: visual, verbal, tactile, sound shaping, mirrors, instruction, diagrams—whatever it takes to get a correct production! If you’ve gone through every possible trick in the book and cannot get an accurate production (as in true and correct realization) of the target, perhaps trying a different target first, that the child is more readily stimulable for, is in order. Working through errored sounds in a sequence can sometimes be effective in terms or unlocking potential for a sound that was previously unstimulable.

So, to sum up, the ability to lead kids systematically through a process of learning to produce a sound that was previously not in their phonetic inventory has huge potential for improving their speech sound production skills. Doing this early on in development can help to ensure that they learn the phonological distinction that this target serves in new words they learn, and lead to a more intelligible expressive vocabulary. Anytime a child presents with 1) a limited consonant inventory or 2) a specific error pattern of omitting, distorting, or substituting for a target sound, they’re a good candidate for isolation level practice. Once they’re capable of producing the target in isolation, we want to run it up the hierarchy to words as soon as possible, because that’s where we start to see the most impact. If we keep these two guidelines in mind—make sure it’s possible for them to produce the sound in isolation before working at word level, but don’t spend forever there, then we’re going to provide functionally relevant therapy services.